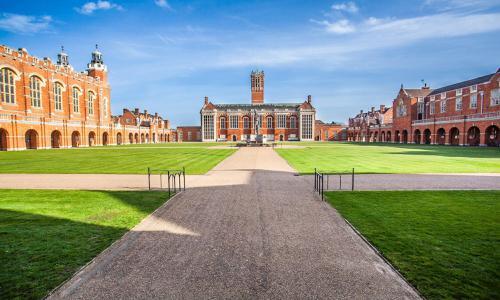 In the second of our new three part blog series looking at affordable access to independent schools, BYT Tutor and former head of Classics at Sussex House James Glasse looks at Windlesham House School in Sussex, Christ’s Hospital School and the work of the Springboard Bursary Foundation.

Washington based Windlesham House School is a Sussex based co-educational prep school offering a limited number of 100% bursaries and assisted places. The school works with local councils and children’s charities as well as receiving donations from parents towards its bursary fund. It also has a link with SpringBoard — an organisation which helps the school to find suitable and genuinely deserving cases to assist.

‘Our bursaries are means tested and we are looking for families whose children would really benefit. We need parents to really buy into a private education for their children and we like to work with parents and organisations with a view to students being assisted the whole way through [their education].’

The SpringBoard Bursary Foundation (‘SpringBoard’) was established in 2012. It is a pioneering charity that offers fully-funded places at accredited state and independent boarding schools to disadvantaged pupils who will best benefit from a boarding education but whose parents cannot afford the fees. SpringBoard raises funds from donors for the bursaries, while some are paid in whole or in part by member schools themselves. SpringBoard also has a wider agenda of increasing social mobility; SpringBoard pupils are supported to help raise educational aspirations in their home communities through sharing their experiences and acting as mentors to other young people. In 2015 SpringBoard supported 62 pupils from 45 schools who went on to attend 29 of its member schools. Eleven pupils were recruited at eleven years of age with the largest cohort being recruited at sixteen plus. Other Sussex based SpringBoard member schools include Christ’s Hospital, Bedales and Eastbourne College.

At secondary level, Christ’s Hospital claims to offer more scholarships and bursaries than any other independent boarding school in the UK. Founded in London in 1552 by King Edward VI, the school is now located in Horsham. — Christ’s Hospital is unusual for a British independent school in that it educates a proportion of its pupils for free, and most at a reduced rate. This stems from its founding charter as a charitable school. School fees are paid on a means-tested basis, with substantial subsidies paid by the School, so that pupils from all backgrounds can have a high quality, independent school education that would otherwise be beyond the means of their parents.

According to a spokesman for the school:

Formerly Senior Master at one of London’s leading independent preparatory schools, BYT Tutor James Glasse has been Head of Classics and has taught Latin, English, Mandarin Chinese and humanities at a number of top independent schools. A Mandarin Chinese speaker, he is a published author having written for more than thirty publications including TES Global, the Times, Independent and Guardian and has authored books for the Economist Intelligence Unit and Financial Times Business Information. He has also published numerous management and business related reports on a published and bespoke basis.