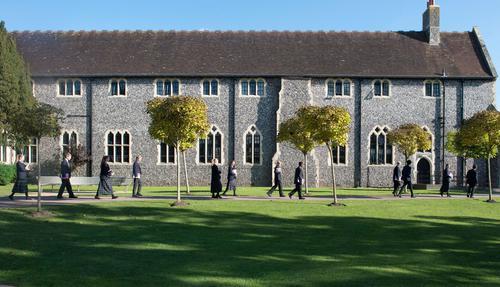 In the third and final outing of our new three part blog series looking at affordable access to independent schools, BYT Tutor and former head of Classics at Sussex House James Glasse looks at Hurst College and the Independent Schools Council.

Hurst College is another secondary private school close to London offering a range of scholarships and assisted places. Financial support is also available in the form of means-tested bursaries for parents of children who have been awarded a scholarship but are unable to afford the standard fees.

According to Gillian Luis-Ravelo, Director of Marketing and Admissions at Hurstpierpoint College:

‘Hurst offers a range of scholarship awards for various aspects of school life. Award holders are valued at Hurst, not only for what they can achieve, but also as role models for others and for their ability to support and lead others. Being an award holder is not only an honour and a privilege, but also a responsibility.’

Awards come with expectations and it is important that these are recognised by those who hold them. Award holders are expected to set a good example and, in the unlikely event that they may transgress any of the school rules, they will lose their award. Pupils also need to fit the school’s academic criteria:

‘Academic potential and welfare needs will always be taken into account but, in general, applicants for academic awards will be expected to have a non-verbal (NVR) and verbal (VR) reasoning score of 130+ and applicants in other categories a NVR and VR score of 120+ in order to qualify for bursarial support.’

Bursaries are determined using the Hurst Scale of awards and Hurst offers its BN6 award for up to two fully-funded scholarship places for pupils in Year 6 looking to join Hurst Prep in Year 7. The Scholarship is means tested and offered from Year 7 through to Sixth Form. The award is aimed at children who are currently in Year 6 and either living or attending a school in the BN6 postcode area. They must also be very able academically, interested in actively pursuing extra-curricular opportunities and willing to embrace the Hurst ethos of supporting and encouraging each other.

Assistance may in exceptional circumstances be available to meet up to 100% of tuition fees payable, depending on the personal circumstances of the applicants. There is also a range of music scholarships and awards for musicians who are of at least grade 3 level. Scholarships are also available at 13+ and 16+ for academic, art, drama, music and sports.

The boundary between the independent and state sector becomes ever more blurred — every year independent schools provide more than £350 million in free places and reduced fees to children from low income homes and according to the Independent Schools’ Council there are now 1,550 partnerships between independent and state schools including new free schools and sharing of teachers in subjects where there is a shortage in the state sector. Independent schools share facilities with state schools for sport, drama, music and art.

As for the future? With the Independent Schools’ Council planning to offer a further 10,000 government assisted places to independent schools, a private education could suddenly become a whole lot more affordable. The plan is designed to meet government demands that — in exchange for its tax-free, charitable status, which saves independent schools at least £150m a year — private schools do more for potential pupils whose families cannot afford to pay the fees. Watch this space.

Formerly Senior Master at one of London’s leading independent preparatory schools, BYT Tutor James Glasse has been Head of Classics and has taught Latin, English, Mandarin Chinese and humanities at a number of top independent schools. A Mandarin Chinese speaker, he is a published author having written for more than thirty publications including TES Global, the Times, Independent and Guardian and has authored books for the Economist Intelligence Unit and Financial Times Business Information. He has also published numerous management and business related reports on a published and bespoke basis.