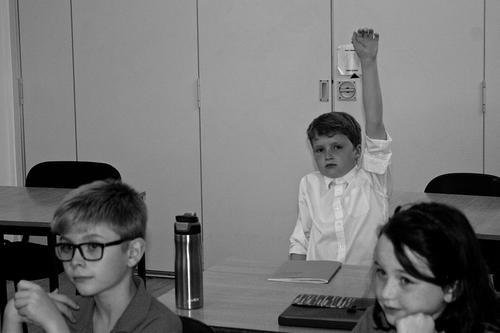 On my very first day, we were taken to the Main Hall where we sat neatly in rows while waiting to be sorted into forms. This also involved us being put into different houses, a little like Hogwarts but unfortunately nothing so extravagant as a sorting hat here. The houses were: Darwin, Franklyn, Austen and Shakespeare. I was sorted into Darwin who often competed with Franklyn for the House Cup.

The school had a reward system in place known as commendations. You received a commendation whenever you did good work or performed a good deed. Whichever house had the most at the end of the year usually won the cup. Although this was also decided by the winners of House Music, House Drama, Cross Country, Winter House Sports, Summer House Sports and Sports Day.

The Grammar School functioned just like any other school I imagine, when I started we had 10 half hour periods per day. We covered every subject including Maths, English, Chemistry, Physics, Biology, Italian, French, Drama, Music, Technology, History, Geography, IT and RS. They eventually decided that this was counter-productive as nobody really settled down to make half hour lessons worthwhile.

During my first 3 years there, a phenomenon known as charity week was also in place. Each form dedicated a week to raising money for charity within the school. Stalls of cakes, buns, biscuits, chocolate, pancakes, hotdogs, burgers littered the School. Games and other fete type fun were available as well. We often generated near 10k for charities during this week.

By the time I hit 15 and started year 10, commendations sort of lost their lustre. As it was a mixed school, mostly everyone’s attention turned towards the opposite sex and of course GCSE’s.

And also, the new headmaster came… He was not well liked to begin with. He decided to take away charity week and make it charity day, plus no sweets or chocolate could be sold. Only home made cakes. Mind you we actually got seats for assembly which was nice, but then we were made to put them away afterwards. Plus there was a litter rota, so that each form at some point would have to go around the school picking up litter. Was a little bit like being called up for jury service. But in the end, he did achieve an outstanding Ofsted report and bought the school into the modern era with younger teachers and better technological equipment… So fair play really.

Break and Lunch were spent out on the field playing football. That was until Sixth Form came around and we were the first to benefit from the new Sixth Form building which had just been renovated.

My Thoughts on Grammar Schools

A one size fits all school system. People are different and make different choices, it makes sense that we have a more varied system in order to accommodate diversity. The issue is not with Grammar schools in that case, but with the lack of other alternatives.

The argument people always use is that it is divisive and that talent is wasted if you don’t pass 11+. This in itself is unfair. This argument would have one believe that anything outside of a grammar school will give you poor education and that bright pupils who fail the 11+ are condemned to fail. Utter nonsense, I know many people who did not pass and went to non-grammar schools who secured places in the top 20 universities in the country. It is simply a question of effort.

What’s more, I know far more than a handful of people from poorer backgrounds who attended Chesham Grammar School. It actually made social mobility easier! Grammar schools may divide children from their classmates but they also undermine privilege. Kids from working class families could gain an excellent education without recourse to the private sector. This is without the need for private tuition I might add. Often it is quite expensive around £20 an hour. However, if one goes down to the local WHSmith, you’ll find practice papers in abundance. A quick search on the internet can explain the technique needed and then it comes down to practice!

I may be biased but I would argue that Grammar Schools are a worthy system. In my school days I was working alongside some kids who were extremely intelligent and talented. I think this really helped to develop me as well, it gives you something to aim for and although you may not notice, it actually makes you work harder and aim higher. Think of it as a tennis game, if the person you’re playing is the same standard or worse, it won’t be challenging and you won’t improve quickly. If the person you are playing is far better, then you’ll have to really pick up your game if you want to win.

To add to this, Grammar Schools provide an environment where it’s okay to want to learn and be smart. Sometimes, bright children can suffer bullying for doing well at school. I never saw anyone suffer for doing well at Grammar School. The other kids wouldn’t compliment you, but often, those who found the work more challenging would ask you for help and defer to your judgement. If anything, the clever children were more popular in the classroom!