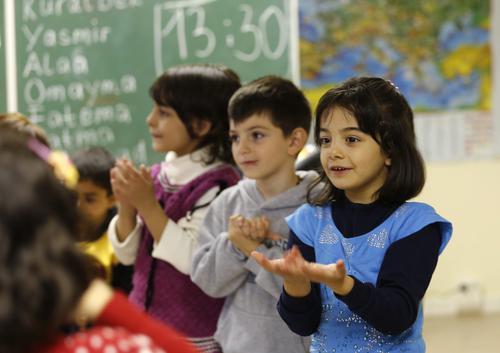 BYT Tutor Tanya Cubric spent last August teaching Syrian refugees as part of a fantastic social enterprise at Newman Catholic College in London. Below she gives an account of her time there.

I was excited and nervous about my first day teaching maths at Newman Catholic College.

I was aware that the children I would be teaching were aged 11–18 years old and split into three classes depending on their current mathematical ability. They would all have different standards of English depending on whether they had been in the UK for 3 months or 18 months. I cannot deny that I had preconceptions about how difficult their journey must have been from Syria to the UK and I was nervous as to how I might cope teaching a bunch of kids who evidently had a lot more life experience to my 25 year old self.

However, sure enough, once I had arrived and received my first class, smiles beaming, cheeky and ready to learn I quickly found my feet and got on with the task in hand.

Teaching 20 kids 11–18 years of age mathematical vectors. All was going well and really what ended up giving me more grief was the incredibly slow smart board and the fact that my handwriting isn’t school board trained…I just about managed, (I hate smart boards). The lessons passed and I was getting more and more confident teaching and holding down a fort of 20+ kids at a time. Very different to tutoring one on one.

Until, one baseball hat wearing boy strutted into my classroom and sat on one of the tables in front of me. I had been warned about him…

This action in itself wasn’t too scandalous but there were two factors in play:

(1.) I was sitting at my desk preparing the stupid smart board slides, which were giving me grief and I wasn’t at the door greeting the class one by one as they came in ….BIG mistake. Huge.

(2.) There was something about his attitude that meant he wasn’t being playful/cheeky, he was ready to challenge my authority and he was not going to do it with a smile on his face.

I then sensed this challenge, and of course try to reassert myself (difficult when your sitting behind a desk sorting out stupid smart slides).

I tell him to please sit in his chair. He refuses

I ask him again to sit in his chair. He refuses a second time by sucking his teeth. I tell him if he doesn’t sit in his chair he will have to leave the class room…. no response. I open the door and tell him to leave . There’s a bit of a stand off until I tell him that I wish we had gotten on. He leaves and I carry on with the class and slowly cool down.

After ten minutes he is escorted back to my classroom with the school councillor, the councillor speaks for him and asks me please can he rejoin if he promises to behave as he is very sorry.

I can see that he is still angry and probably embarrassed also, definitely not ready to sit down and be calm again, however I can’t refuse him a second chance…. but we both know its not going to be smooth sailing. This time he sits on a chair. Thank God. And then I make a mistake. I push it. I tell him to take his hat off…. he says ‘No, its cool, its cool’, and gestures that I get on with the lesson, I don’t need to be cool (I definitely do). I turn back to the board and groan ‘why are you being so difficult? Please take you’re hat off’…..silence…’ if you don’t take your hat off I am going to have to ask you to leave again.’ He urges me to continue with the lesson and implies that I should be quiet. The hotness in my cheeks returns and I fume, this time I slam the door open and tell him to get out immediately. ‘You are wasting everybody’s time and you are not ready to take part. Get out.’ I shout at him. A friend sitting next to him nudges him to leave, he gets up and goes, as he walks past me he says in front of everybody ‘you need to fix up’ and gives me a dirty look. I slam the door after him. The lesson continues, the cheeks cool down and we get back to everything as normal.

I ask if I can sit next to him on the step, he continues to stare ahead with dagger eyes, but silently obliges. I sit down and say, ‘I am really sorry that I shouted at you , I shouldn’t have done that I shouldn’t have embarrassed you. Its my mistake, I was sitting at my desk when you all came in and I didn’t look up to greet you.’ He looks up at me and the dagger eyes have gone! A miracle?! ‘No no… its ok’ he says, ‘I’m sorry too’ . I say thank you and ask him if he wants to join the next class, its a harder maths set, ‘do you like maths?’ He replies that he does, ‘I’m sure you’ll be fine then’ I say. I am beaming inside. He comes into the classroom, I’m at the door greeting everybody, he sits down…and takes his hat off. The lesson goes very well and we end up getting on. I am later told by the head of the summer camp that that was the first lesson he has attended all day and that throughout the camp he has never before stayed for the entirety of the lesson. I am glowing.

Tanya Cubric is a UCL graduate. She has been tutoring science and maths (Common entrance — A level) for over 2 years (800+ hours). In addition to this I was a member of the science in schools club at UCL where we provided talks to primary school children on Climate Change.