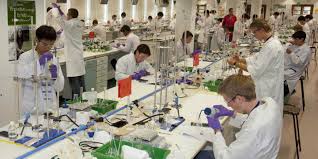 The first interview was a subject interview and was mainly about biology (I was applying for biological Natural Sciences) – I was asked to draw an amino acid and consider how it would react, then I was asked what I thought the biggest discovery in biology of the 20th Century was and why.

I chose antibiotics and was then asked to explain how I thought they worked – something I hadn’t previously learned.

The second interview was called the general interview although after a cursory chat about my personal statement it quickly became a technical conversation about chemistry – It was about the shape of orbitals.

There was also a Thinking Skills Assessment (TSA) which was a critical thinking test.

Listen carefully to what you are being asked – they will start with some facts you should know to relax you, then start to stretch you with stuff you shouldn’t know – make sure you realise when this is and think logically, critically and imaginatively. DON’T interpret the question as something you should already know and waffle about stuff you learned at A level. The idea of the interview is to see how you cope with new, complex material.